Two Makerere University lecturers are admitted in hospitals after being attacked by Bijambya squads in Namugongo Nsaggu.

Those attacked are Dr.John Bosco Kalule and Dr. Nampazira both lecturers at the college of Veterinary Medicine Makerere University.

It is said both were cut by pangas as other members of the houses were beaten.

He is also interested in foodborne antimicrobial resistance. He graduated with a PhD in Microbiology from the University of Cape Town in 2017, holds a Masters of Medicine – Microbiology, and a Bachelors of Veterinary Medicine degree from Makerere University, Uganda. He is a lecturer at Makerere University College of Veterinary Medicine, Uganda and also a member of the taskforce of the ministry of health, Uganda that has investigated viral haemorrhagic fever outbreaks. 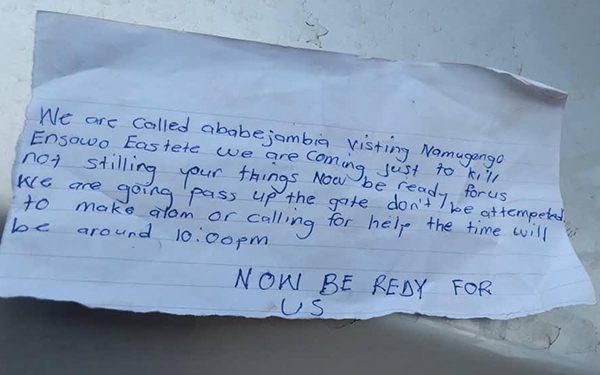 However, this comes at the time when the Bijambya have warned residents of Namugongo, a Kampala suburb with threats contained in an anonymous letter allegedly written by dreaded Bijambiya squad warning of an imminent attack at 10pm.

However, the killers didn’t specify which day and date they will strike.

In the letter, the author said they will visit Nsawo Estate first with only one motive, “to kill”.

“We shall not steal your things. We are coming just to kill. Now be ready for us,” the message read in parts.